The “Swamp” waters are a rising and the gators are hungry, as Obama’s Crossfire Hurricane Slams America! Did you ever expect the so-called scandal-free Obama reign would be plagued by this whole-sale assault on the American Constitution? You have the Obama administration’s FBI use a “sketchy CIA operative Stefan Halper” to frame the Trump campaign… with the very High Crimes Hillary was guilty of!

IF the 2016 Election “fix” would have worked as it did in the DNC Primary, as it stripped Bernie Sanders of his rightful place… no one would have been the wiser. But (as God would have it) …it wasn’t meant to be! Out of no where Donald J.Trump broke through the scum ceiling of the DC Swamp-waters and slayed that Hillary hag!

This spy-op by former President Obama is literally a Deep-State coup against a sitting American President! Under the code name: “Crossfire Hurricane” …the Obama administration on all levels of the DOJ, FBI and CIA… conspired to unseat a democratically elected President of the United States. After their flawed felon (Hillary) failed to secure the swamp for another term.

Don’t get me wrong, the GOP has a few scum-suckin’ critters in their ranks too… and like John McCain they are in lock-step with the opposition against Trump. Why? Because Trump is an outsider, that doesn’t need their money, their favors and cares less about their threats. Worst part is that Trump is actually working for those who elected him to take them all down! 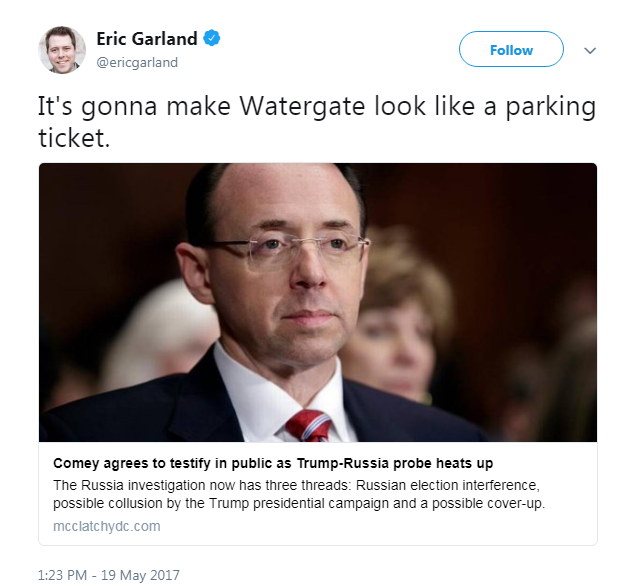 Eric Garland is right, this scandal makes Watergate look like a parking ticket! How is it even possible that the unfettered Justice Department and American Intelligence have conspired against a sitting President with impunity? They stand all upright and swear to uphold the Constitution, and no sooner is the paint wet on their office door… they prove to be treasonous cowards.

Don’t get me wrong, the GOP has a few scum-suckin’ critters in their ranks too…

Before Obama’s Crossfire Hurricane Slams America, you have the Deep-State bracing for cover… and getting ready for the Media frenzy that will follow. Truth is… they are going to need it! House Republicans have just demanded a Second Special Counsel…

In view of the RED (T-for-Trump) TSUNAMI that is building as a response to the corruption left behind by the Deep State Obama Administration, in a last-ditch effort, Obama has partnered with Netflix to mitigate his OBAMAGATE! But will it be enough to keep him and Hillary out of orange jumpsuits?

Is this an attempt to battle media master Trump at his own game? Well, if what’s left of Obama’s “legacy” is any indicator… Obama will be soon walking down the road talking to his iPhone wondering just “WHAT HAPPENED?”

One thing people don’t get is that people humbled themselves in prayer and God put Trump where he is. Obama was equally blessed of God and was given 8 years to accomplish his promise as the first President who could identify with minorities… but he didn’t.

People wanted a black President and God heard our prayers… but as we can see, Obama may be black but his favorite color is GREEN! 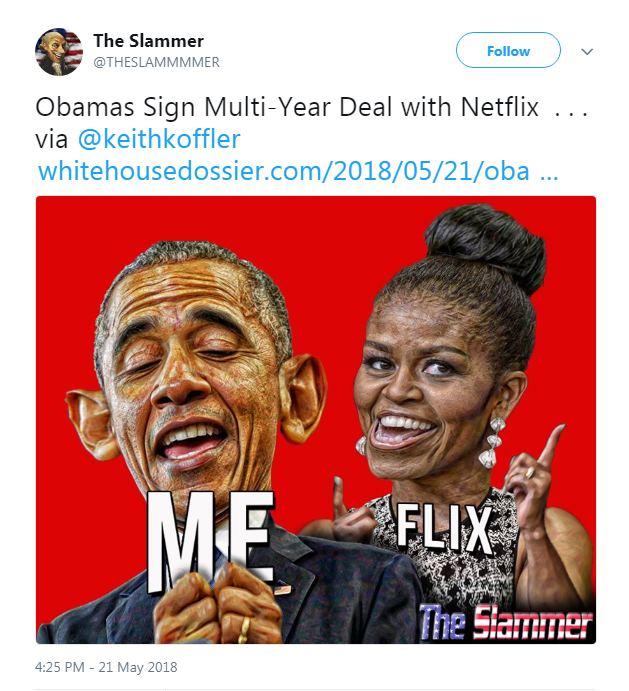 Honestly, SNL may have been the better choice for Obama’s come-back… seeing as his presidency was a terrible joke.

I just think that many people like myself were simply disappointed with the Obama reign because he could have done so much better. Americans need to stop dreaming of a black/white Christmas and vote policy.

“It’s must-flee TV,” wrote one critic, while another suggested, “It’s no longer Netflix” and a third declared that the alliance was “the deep state further infiltrating the entertainment industry.” The hashtag #BoycottNetflix also re-entered the fray. It was previously employed in March following the appointment of Susan Rice — former U.N. ambassador and national security adviser to Mr. Obama — to the Netflix board of directors. — The Washington Times

Americans need to stop dreaming of a black/white Christmas and vote policy.

As Obama’s Crossfire Hurricane Slams America, the off-shore damage is mitigated by the thriving Trump economy and the “Peace Through Strength” foreign policy. While these deep-state actors have their date with the Judge, Trump is making history as the best President EVER!

I think that this is what happens when God’s people pray like they mean it! Never has God become more popular under the least suspecting President… but I guess it is like Luke 7:47 “those who have been forgiven much, love much!”

Stay tuned as the saga continues, but remember there is hope and more of what life has to offer, and this FREE eBook by John Piper is a good place to start…