Some things make you mad enough to swear, maybe this is what Ford had in mind when they designed some of their vehicles! You can hear them now in the shop laughing their heads off at the new F*Bomb series… like the 2002 Ford Explorer. With the stamp of disapproval… CarComplaints.com has this to say about the Explorer… “Avoid Like The Plague!” So it got me thinking  that maybe they misspelled it… is it Ford or Frod? Now you’re thinking that sounds like fraud!

There are lemon laws out there to protect the buyer… but what about faulty service parts that are designed to fail? In my opinion that is exactly what this particular model, with the 4.0 liter engine has built into it. One of the timing chain tension cassettes have not much more than an 1/16th inch thick plastic to keep your timing chain tight… while all other tension bars are made of 1/2 inch thick cast metal or steel? Does that sound right?

One side you have very thin plastic, and on the other heavy steel or cast metal… even if you don’t know what I am talking about, you can figure out that the fix worth over $2000.00 wouldn’t be something you want to happen during the life of your vehicle… let alone TWICE!!

I am going to give you a peek into the kind of job it is to take these engines apart, and more specifically how half the rear timing chain cassette is made from plastic! At minute markers 9:46 and 9:47 I took a couple of pics to show you how ridiculous these parts are made, and in my opinion designed to fail (not my video).

Here you can see what I am talking about… it is about 1/8th thick of an inch of plastic broken around a bold hole that secures the timing cassette. What you cannot see is that under the bolt washer is that the plastic is half again that thick… only about 1/16th of an inch. 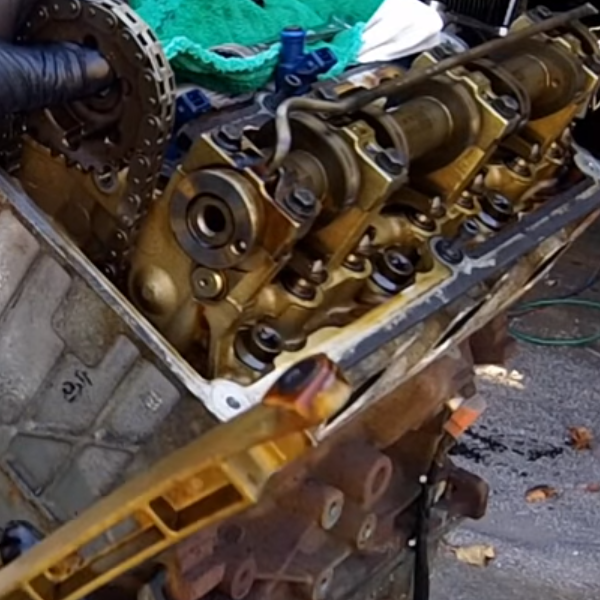 The other half of the timing cassette was broken off because it was made entirely of plastic. The metal half of the cassette suffered no damage what soever, as you can see better in the picture below… 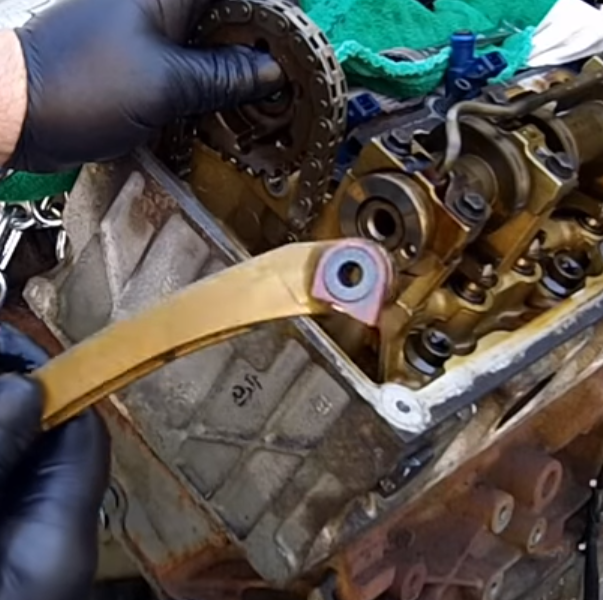 Here is the deal,

I changed my timing chain tensioner cassettes and only about 600 miles later I had to do it again… the replacement parts are just as ridiculous as the factory ones! You would think that there would have been a recall or that they simply would have redesigned the plastic side of the cassette in order to handle the normal wear and tear an engine provides. But no, the replacement parts are unconscionably as faulty as stock parts. 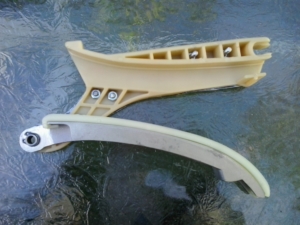 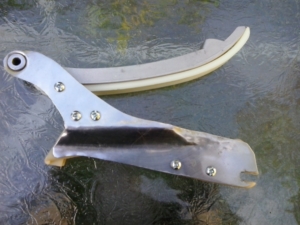 Here is my question,

Do you think that the Ford Dealership Service Department is going to hand-manufacture ways to strengthen these frail faulty replacement parts? After spending thousands of dollars to replace these timing chain parts… and more if damage is done by parts failure, you may just have to do it again… and again!

The thing is you cannot change these parts like other normal vehicles with all the timing chain parts at the front of the engine… NO! These 4.0 Fords are in other vehicles too like Mustangs, and you need to separate the transmissions from the engine to get at these parts!

Most of the time people have to pull the motor completely out in order to service them. I did a frame-in where I first took the transmission out and jacked up the motor off one motor mount, in order to get enough room to remove the lower half the engine… the rest of the top intake came off with out a hitch.

The second time I lowered the front differential and rack and pinion steering… and only moved the transmission back about 10 inches. Either way it was a nightmare one would only want to have once! But the second time I had to change them… you could say it inspired this rant!

You heard the jokes… F.O.R.D. stands for Found On Roads & Ditches… well I have also been stranded by this particular Ford one time prior to all this, in the Columbia Ice Fields, as I was on a rescue mission to save my daughter from her Ford Explorer!

I say 3-5 strikes and you are out! I would be insane to buy another Ford, and it isn’t like Ford is going to replace the crazy hours and thousands I spent fixing their crap! I must leave my love affair with the Frod and go back to Chevy’s and Dodge!

Good news is… I have hooked you up with a great site that uncovers complaints and problems vehicles have, so you know what to look for before you put out your hard earned money to buy them!

You know I don’t mean to complain but… CarComplaints.com is now my favorite site to give people as they are looking to buy used vehicles!

One more thing, here is a great FREE eBook that can help ease your tired mind if you are like me, too late smart…

I must leave my love affair with the Frod and go back to Chevy’s and Dodge!

Hell Is Too Good A Punishment!

What is in a NAME? That old saying might convey a true sentiment, but calling a