What a Headline… CNN Beheads Trump And Fires Kathy Griffin “The Bride of ISIS!” Is this just the EXPOSED face of liberalism? Or is this a new look to Democrats in disarray? Not to defend Kathy Griffin in anyway for her photo-shoot holding the decapitated head of the US President Donald Trump, but most comedians test the water of the cesspool they are about to dive into long before they do. What is interesting is, Kathy Griffin was only depicting what her crew has been talking about all along! What I mean by her crew …is the left-wing-nut comedians who want to see Trump dead. Period. 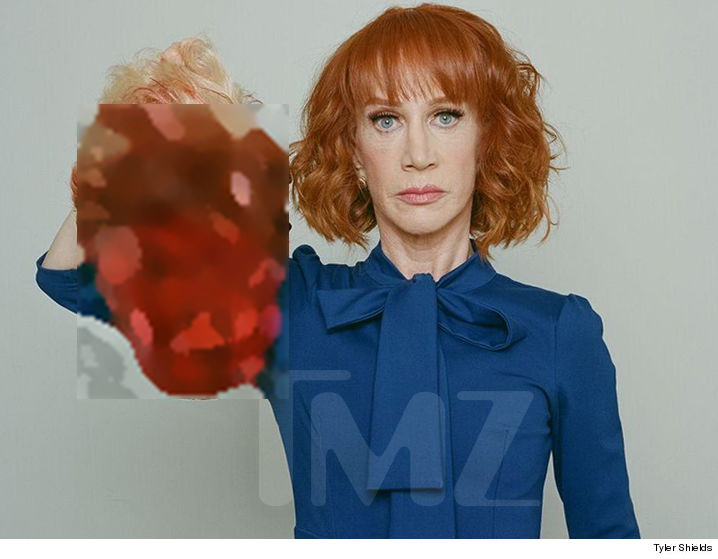 What seems to have embolden Griffin into such an in your face death-wish for the President, has been fueled by many who came before her, but only slightly cloaked. It is just that Griffin got caught!

Bill Maher pushed the same line during a D.C. performance, spurring someone on to do what had to be done… “If this race is even the week before the election, somebody is going to have to go out there…” and Madonna “thought an awful lot about blowing up the White House.”

Liberal news site Fusion insinuated Trump’s assassination might be by a “double agent” (wife Melania ) known as the “Slovenian slayer” …and Rapper Rick Ross also performed saying, “Assassinate Trump like I’m Zimmerman.” Even a couple of British journalists “It’s about time for a presidential assassination” and “Thee assassination is taking such a long time.”

It is no wonder that such a new low is tolerated on the Left. Or is it? Maybe we are just getting a clear view of where they have always been, when they don’t get their way! After all this is the same bunch that didn’t have a problem with Lyin Hillary over Benghazi, emails and pay to play! And with the apparent Seth Rich assassination, suspected DNC leak to Wikileaks… it all seems par for the course.

It seems they can do what they want, and if there is too much backlash against their disgusting behavior… a simple forced apology, as in the case of Kathy Griffin, will suffice. This whole ball was rolling long before Griffin, she was just pandering to her base, exposing their moral absence. And only now that there is such an outcry… the Left is forced to eat one of their own! But not to worry, she’ll be back.

Like Snoop Dogg’s video featuring a “mock-assassination” of  Trump, but it was ringleader CNN that started this whole business to begin with… and was “deservedly criticized for a pre-inauguration report on the designated survivor would take over “if an attack hit the incoming president.” … It played into liberal fantasies that an attack, “could put Obama cabinet member in Oval Office.”  …one could say CNN radicalized Griffin!

This is no joke, since there has already been an attempt on Trump’s life on June 18, 2016, that attack that went basically unreported. What the Left wing media is doing is nothing less than inciting violence… and that against the very institution of the Sovereignty of the United States, and no less than treasonous!

It is said… “A picture is worth a thousand words” …and some are worth more than that! And so should their consequences be! There is certain freedom of the press, and many will cite these actions as free-speech. Yet if that is the case, wouldn’t this be equated to uttering threats or plotting an assassination or a soft coup?

Griffin… was just pandering to her base, exposing their moral absence. And only now that there is such an outcry… the Left is forced to eat one of their own!

Makes you wonder what is next…

I think that such media lunacy, echoed by Hollywood, needs to be addressed for what it is, and sent a message that they aren’t worth our time or money. Some have made video comment about this embarrassment to the Liberal camp, though I don’t agree with everything Mark Dice says… he kind of puts Kathy Griffin’s behavior in perspective… WARNING GRAPHIC IMAGES

Every day it seems that the Left is demonstrating it’s foul proverbial odor. If it isn’t Dwayne Johnson on SNL inventing pedophile robots and saying “Hail Satan” …it is crotch-hat wearing snowflakes burning down one University or another. The world “Going to Hell in a hand-basket” at the hands of the Liberals… is an understatement. But those who refuse to do anything about it are just as bad!

And the weirdest thing about all this, is that the “Church of Satan” has denounced this despicable photo-shoot …but me thinks they protest too much! Why would they even weigh-in on this at all, unless the spot light is hitting a bit too close to home?

This isn’t over, it just started! Do you think I am a bit over-the-top? Kathy Griffin is just another poster child for the real deal… the Women’s March featured Donna Hylton who kidnapped and tortured a man to death! Assassinations of whistle-blowers that expose Democrats, to hostile left-wing Liberal Fascists against conservatives like Sean Hannity or Bill O’Reilly… check it out here.

Kathy Griffin now plays the victim because she is facing boycotts and possible investigation. Saying Trump is trying to “ruin her life forever” …after she just promoted the assassination of Trump by beheading! She has the nerve to say “Trump broke me” …when she is the one who terrorized 11 year old Barron Trump with her sadistic call for someone to behead his father?! This is so Liberal, so DNC and so ridiculous… this was spurred on by Liberal Hate, and should be viewed as hate speech and prosecuted as such. But failing that, Griffin should just live with the repercussions of her actions.

At one point she tried to play the race-card against “older white men” (Trump) …but she was the one holding his severed bloody head?! Griffin should have known the majority of the Nation supported and elected Trump… and the majority of those who didn’t still support him now as their President, and will protect the office which they hold sacred. And now that she is facing some blow-back from the BOMB she dropped… sobs, not for what she did, but for the consequences she now faces! Sad.

She came off as “The Bride of ISIS” and thinks that America is ready to accept her perversion of what is acceptable with open arms? I don’t think so. She called for the assassination of the President and should at least face some consequences for her actions. Like those who burn down Universities, shoot law enforcement officers and “protest” by breaking the law in other forms… they need to be sent a message that there needs to be respect for the rule of law, and not given a trophy for participating in civil unrest!

What a sad example to be set for the next generation that already has a overwhelming sense of entitlement… they can burn the country to the ground, kill whomever they want (because they are triggered)… and get to play the victim all at the same time. Just like the Queen of the Victimhood culture… Hillary Clinton. One who broke the law, broke the American trust and sold out the sovereignty of her nation to the highest bidder… and then turned around and blamed everyone else for her despicable treasonous actions.

I am sure that the saga won’t end there, and Trump will probably be impeached over Griffins actions… if the Liberal Media has their way. I am not holding my breath for this all to end well, it is just a poor commentary on the state of society when evildoers are protected, and protectors are treated as evildoers. But things can changed… after all Trump was elected with all the cards stacked against him.

What does Griffin have to worry about anyway? It is not as if she is Seth Rich and she just finked on Hillary Clinton…

At the end of the very long day, these “rabble rousers” (like George Soros), would rather the world burn in Hell, than focus on building families, cities and countries. It is up to every freedom loving, democracy voting, God fearing individual to do their part to separate themselves from these parasites, they suck the life out of anything that gets close to them!

Now go have a shower… and get all that Liberal Fascist nastiness off ya’all, then sit down with a great free book…

*BREAKING Fomented by all the Democrat Liberal Left violence against Republicans, now we have shooter attacks on GOP at baseball practice, what is next??