We are living in fantastic times… there are conspiracy theories and then there are just plane conspiracies! Who knew we would be seeing a bold-faced democrat mutiny, a “Shadow Government” emerging as a coup d’étate against Trump? These things were only spoken of in hushed tones behind closed doors, but now… an in-your-face insurrection? You know, if it weren’t being pulled off by the failed Democrat Party it might even be scary! But if this is all Obama’s Political Legacy amounts to, history will record these bumbling liberals as… “The Coup Klutz Clan!”

I know this whole thing isn’t just going away, and there is some real-time damage being done to the Trump administration, yet I do think that with each new unveiling of a new tactic, so will be the underestimation of the force they are contending with. Because it isn’t just the administration that these mutinous sorts are up against… it is America! Americans voted, and will if necessary, come out in force to stomp out these fires of rebellion!

Now before you go all SNOWFLAKE on me and say this is racially motivated, I want you to know that I am only scrutinizing Obama’s white half… or should I say white-side? You see, I believe that there is only one race (the human race), so if someone wants to race-bait this argument, I say let’s canoe up this river a bit further. Obama has failed the black community… to quote Clarence McKee “So, looking back on Obama’s eight years, black and white voters have one thing in common — they were both bamboozled!”

“So, looking back on Obama’s eight years, black and white voters have one thing in common — they were both bamboozled!”

But let’s get back to the matter at hand, there is plenty of evidence that Obama isn’t content with 8 years of destroying America, and neither are the Democrats. Obama had the nerve to say that if he was running for the Presidency against Trump, that he would have won. 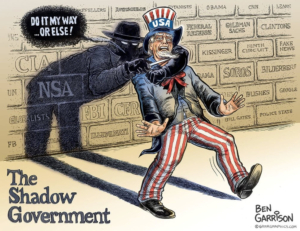 According to Breitbart, Valerie Jarrett, Obama’s former special advisor in the White House, has moved into their home with former first lady Michelle Obama. Their mansion is alleged to serve as “the nerve center of a mounting insurgency against [Obama’s] successor, President Donald J. Trump.”

Attorney Robert Barnes was asked by Breitbart about the leaks within the swamp “There are people willing to leak the most sensitive national security secrets about any particular matter, solely to have a one-day political hit story on Trump. These are people who are violating their oath, and violating the law. Hopefully there is ultimately criminal punishment”

Do you want to know how far Obama is willing to go? ‘He’s coming. And he’s ready to roll.’ says former Attorney General Eric Holder. It is a “Sneaky Obama ready to spring coup d’état to force President Trump out of office” …I admit, this is getting crazy!

“…Here you had Obama’s people using the NSA to spy on his adversaries, and apparently include the CIA, the FBI, and members of the Department of Justice in that loop, in a manner that was not approved of by any court, that was not approved by even a FISA court – the special court that monitors certain kinds of surveillance” — Robert Barnes

And the legal implications, American Center for Law & Justice Jay Sekulow, says that “White House leaks almost a form of ‘soft coup'” speaking out on ‘Hannity’. This illegal “leaking” activity was basically caused by an order by Obama 17 days before he left office, on the way out Obama ordered information to 16 agencies other than the NSA, causing this uncontrollable leaking sieve!

Personally I think that any such attempts at a ‘soft coup’ or a hard-boiled coup, is just some chicken sh*t attempt at overturning the very fabric of democracy, and should be penalized by every measure of the law… and soon will be!

The thing is, America turned out in droves to elect Trump because he represented them, plain and simple. No matter what this former administration, former political party, and former ‘beep on a screen’ has up their sleeve, it would seem that even God is fighting against them!

So is Obama’s Political Legacy, “The Coup Klutz Clan?” Will his minions be the death of The Donald? Will you be able to make your next months rent payment, or will you have to take an advance on the future Obama has left you? Remember as you sit on the edge of your seat watching the news… don’t forget to breathe.

So will they succeed? At entertaining… possibly. However I would suggest if you are the patriotic type, don’t expect these battles to be won by your indulgence of popcorn… when your world is going to Hell in a Hand-basket. Like everything else in life, you cannot be an absentee Patriot!

But whatever you do, don’t lose sight of the big picture…

here is a FREE BOOK…

The Shack, Should Be Called… The Sham!