For purposes of… getting right to the point, this little rant isn’t going to be a lengthy bashing of the heartless Business of Cancer Treatment or the endless Research that seems to go nowhere. Also, this article is not going to be a technical summary of where we are in this struggle, rather I just want to give some references of successful human trials with one particular cancer treatment.  And then, when you consider the 200 Billion In Cancer Treatment vs DCA Cancer Research, you will know why you haven’t heard of it.

Where do the donations go?

“Here are some quick facts that will hopefully make you think twice before you donate:   [read more on this quote]
-The American Cancer Society (ASC) that sponsors relay for life spends on average $600 million a year on employee pensions. This well over four times the amount the ACS spends on cancer research annually.
–Retired CEO Donald Thomas’ salary was over $1.4 million, and VP of Divisional Services William Barram was making over $1.55 million.
-In the same year that the ACS was forced to cut budgets for “economic reasons,” the CEO’s salary doubled to over $2.2 million.
-In fact, roughly 95% of their overall donations go towards salaries, leaving a meager 5% to go towards “the cause.”
-There have been several reports over the last two decades of top-tier ACS employees who have either been convicted of or admitted to fraud, tax evasion, and embezzling millions from the company.
-Finally, the most overwhelming of all: in 2010, the ACS donated just one penny ($0.01) for every dollar donation it received.” 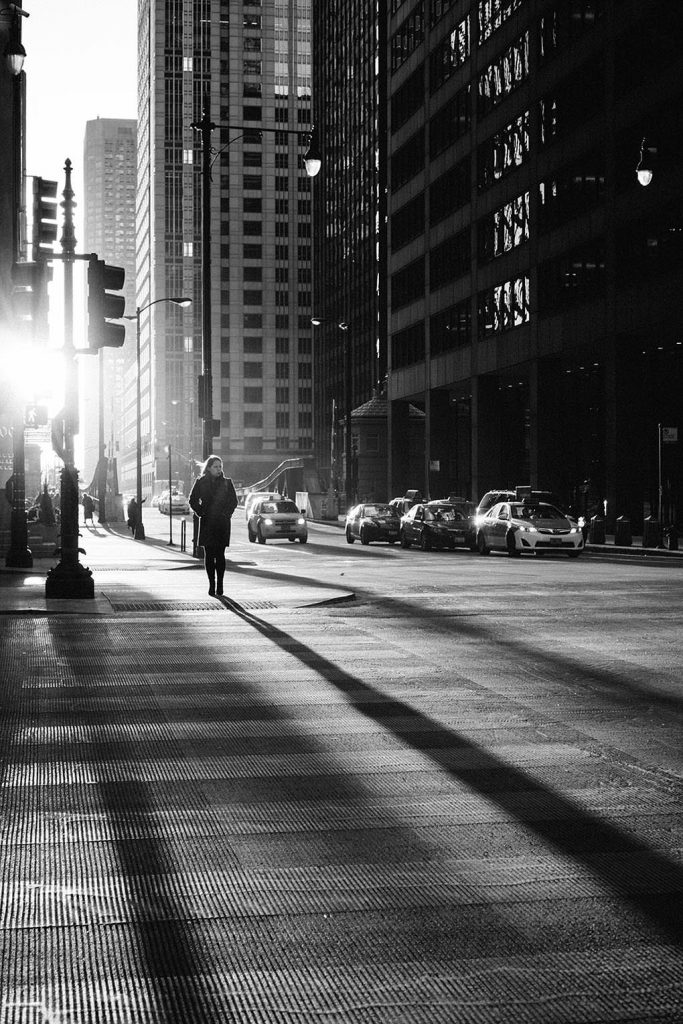 So, where does that leave all of us? There are many people just taking their health into their own hands. I have one friend that has treated his inoperable prostate cancer for over 25 years, by keeping his body alkaline… as cancer cannot grow in an alkaline system.

Part of all this, is doing some personal research into treatments that are more than just some snake-oil attempt to tap into that market of 200 Billion In Cancer Treatment vs DCA Cancer Research. There is a lot out there that has been done in real research, but unfortunately it rarely gets to those who need it most. So that said, let’s get into the meat-and-potatoes of what we know, and I will give you a raft of references you can look into for yourself.

What is DCA (dichloroacetate)?

“DCA (dichloroacetate) is a naturally occurring, simple and inexpensive compound with significant therapeutic value in disease treatment – especially cancer. DCA use in the treatment of disease is not a new concept. For more than 30 years, DCA has been used safely and successfully to treat rare metabolic disorders in both children and adults. Recent evidence on the safety and effectiveness of DCA as a cancer treatment makes this novel compound an exciting adjunct in cancer care, especially in those who have advanced (metastatic) and drug-resistant cancers…

DCA is a novel cancer agent because it doesn’t directly kill cancer cells (the standard mechanism of most chemo agents, which renders their significant toxicity). Rather, it alters the unique metabolic features characteristic of cancer cells … DCA specifically targets these dominant cells, producing the clinical observation that most individuals having their disease treated with DCA experience a partial or complete response to treatment and many have achieved stabilization of disease as well as cure.” [Read more: Port Moody Health] 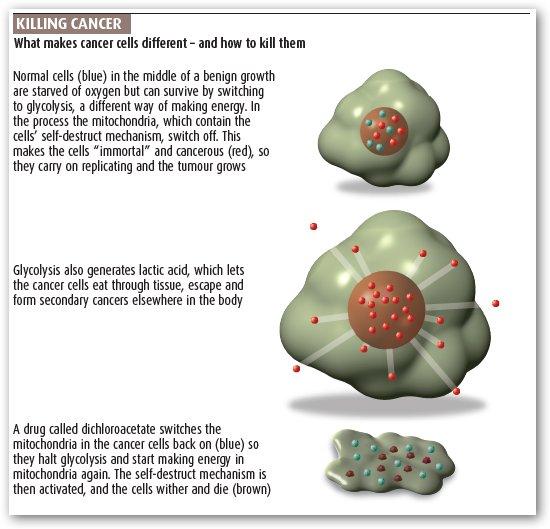 “The Michelakis team (University of Alberta) reports that DCA turns on the mitochondria of cancer cells, allowing them to commit cellular suicide, or apoptosis. Cancer cells shut down the mitochondria, which is the part of the cell that is involved in metabolism and, incidentally, initiates the cell suicide. A non-cancerous cell will initiate apoptosis when it detects damage within itself that it cannot repair. But a cancer cell resists the suicide process. That is why chemotherapy and radiation treatments do not work very well and actually result in terrible side effects… the healthy cells actually die much easier.

Michelakis and his team discovered that they could re-activate the mitochondria of cancer cells. Not only that, the DCA is very effective in doing it: To quote from the Michelakis paper: “The decrease in [Ca2+]i occurs within 5 min and is sustained after 48 hr of DCA exposure.” The mitochondria are so sensitive to DCA that just 5 minutes of exposure reactivates them for 48 hours.”  [Read more: The DCA Site]

“Dichloroacetate (DCA), is probably one of the first anti cancer drugs I came across when starting to search for new effective drugs that can help fight cancer. After all these years, I believe even more in the potential behind DCA. This is because, I do know personally two people/friends who benefited from DCA treatment and they are alive today due to DCA. And they used no other major treatments such as chemo. One of them is a man diagnosed > 10 years ago with stage IV colon cancer and the other is a man diagnosed > 5 years ago with stage IV lung cancer. And both of them are alive today.”  [Read more]

DCA turns on the mitochondria of cancer cells, allowing them to commit cellular suicide, or apoptosis…

Are there side effects to DCA?

I have given you just some reference to the literal mountain of evidence and research that has gone into DCA Cancer Research, and I need you to know that I wouldn’t recommend anything that I didn’t test or use myself. I am one of a few personal friends that are using DCA as a cancer treatment and preventative care. Out of the group, I am the only one who is facing some side effects, actually caused by the effectiveness of DCA. But there are ways to minimize side effects.

We have looked into some of the dosages recommended, and what we settled for was dividing the daily oral dosage and taking DCA 2x/day, 2 weeks on and 1 week off (recommended by most of the clinical treatment centers) and taking Vitamin B1.

“About 45% of patients will experience side effects to DCA treatment. You must be under the supervision of an ND or MD who is well trained in the delivery and administration of DCA and other cancer natural cancer treatments. Side effects to DCA are all reversible. With oral DCA, the most common side effects include: peripheral neuropathy (numbness in an area of the body, with or without associated nerve pain; experienced in 15% of patients), fatigue (15%) and confusion/reduced memory (15%). IV DCA has fewer side effects and whatever side effects are experienced, are short-lived. No true allergy to DCA has ever been observed.” [Read more]

“This is a condition in which a large number of tumour cells are rapidly killed, causing a sudden release of the contents of the dead cells into the bloodstream. It can result in abnormal heart rhythms, salt imbalance in the blood and kidney failure. A detailed reference article can be found here. TLS occurs most commonly in patients with a large mass of tumour cells in the body who receive chemotherapy, especially with lymphomas or acute leukemia. In theory, DCA should not cause TLS because it kills cancer cell naturally by apoptosis. We have not had a single case of TLS in our patients treated with DCA alone. Since DCA can enhance the effect of chemotherapy in certain cases, it may be more likely to occur if DCA is combined with chemotherapy (especially without medical supervision). We have noticed that intravenous DCA can work more quickly than oral DCA in some cases, so there is theoretically more risk of TLS if i.v. DCA is combined with other therapies such as chemo. We have observed one cases of TLS when i.v. DCA was combined with cannabis oil.”  [Read more]

“This is a difficult subject to explain without people viewing it as a conspiracy theory. We simply wish to provide information that most people can understand and believe from respected medical publications about this discovery.”  [Read more: DCAWatch.com]

…a difficult subject to explain without people viewing it as a conspiracy theory.

One thing to note, regardless of the thousands of people that have personal testimony of success with DCA, there is a well-funded 200 Billion In Cancer Treatment vs DCA Cancer Research. With 1 in 2-3 people in North America getting some form of cancer, it is a growing market with huge Stock Market implications! So, is the money in the cures for cancer… or the treatment and research?

Here is some more references I have found useful, which by no means is exhaustive. I stay away from the cancer society/foundation sites, because I believe they present a conflict of interest, taking donations for research for decades with nothing to show for the billions given. I guess… Why find a cure when you can continue treatments and research? These are merely my findings, my own personal opinions and just a few publicly accessible documents and links.

On a personal level and reflective of a personal journey, I would like to pass on a FREE BOOK that is great for the soul. God bless, and I hope you enjoy this book as much as I have…

“It is s better to lose your life than to waste it.” ― John Piper

I Love Social Media Much More Than It Loves Me!

Concerts For Cancer, People All Over The World Respond!

It Smells Fishy, America Wants To Know… Where’s The Memo?

The FBI says “just trust us” but it smells fishy, America wants to know… where’s the